In 1995, William Utermohlen was diagnosed with Alzheimer’s. Because of who he is, he decided to try to understand what was happening to him through painting. So the artist painted himself through Alzheimer’s. Leaving a series of thought provoking self-portraits behind. 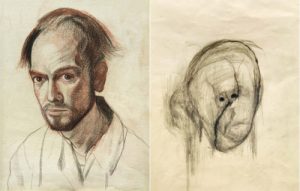 Artist Painted Himself Through Alzheimer’s

The paintings show the effects of his dementia as the disease progressed. Because Alzheimer’s affects how people see, his perspective changed. It tilted, colors were flattened, and details started to disappear. Utermohlen’s doctors felt that he knew about the technical flaws of his paintings but he wasn’t sure how to fix it. His paintings are described as depicting sadness, anxiety, resignation, and feelings of shame.

Dr. Bruce Miller, a neurologist at the University of California, studies artistic creativity in people with brain diseases. He believes suffers of dementia could still produce powerful work. He says,

“Alzheimer’s affects the right parietal lobe in particular, which is important for visualizing something internally and then putting it onto a canvas,” Dr. Miller said. “The art becomes more abstract, the images are blurrier and vague, more surrealistic. Sometimes there’s use of beautiful, subtle color.”