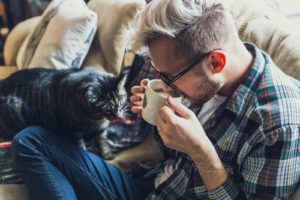 Keeping the Bonds with Pets, while having Alzheimer’s

Gutis has a motley crew of cats and dogs. At 54, he learned he had early-onset Alzheimer’s. He became part of a study that was to help with memory loss in younger people. He was concerned about the logistics of the test, along with the emotional distress he was going to feel.

Soon he began to even get confused about his pets. He would think a cat was missing even though he just greeted him. He would wonder why a stranger’s dog name sounded so familiar. Forgetting he had a dog with the same name.

And I have a turtle creatively named Turtle and a bearded dragon who goes by the name Leo. And I have my dogs and cats, as loyal and loving as ever. I have my Jack Russell named Abe who now comes to the office with me each day. I have wandering Max the cat, and a sweet soft cat named Obie whom I brought home from my office and now spend hours stroking and petting and listening to her purr.

I know that someday I may not remember them, but that doesn’t lessen the pleasure they give me now. And the thing I know about my pets is that they will always remember me.