There is so much effort going into the detection and treatment of Alzheimer’s, now there’s a new device that may be able to help. Sophomores at the University of Maryland, won first prize in a National Institutes of Health (NIH) competition for their prototype of portable EEG device. This new gadget may be able to diagnose Alzheimer’s. 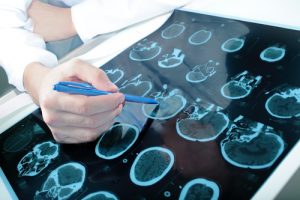 New Gadget may be able to Diagnose Alzheimer’s

What started as a focus on detecting concussions turned into Alzheimer’s detection because members of the team had relatives who had died of Alzheimer’s. The students were thinking of using an electroencephalogram (EEG), a test that records the electrical activity of the brain.

An EEG used in a doctor’s office or a research lab has as many as 256 electrodes and is the size of a desk. The team wanted to shrink that down to 8  or 16 electrodes.

This new design is easier to use and more affordable. The new EEG, called the Ultracortex, is a open source headset that you can connect to a laptop. The headset costs less than $2,000, while most EEG machines cost hundreds of thousands.

The machine is able to diagnose Alzheimer’s with an 83% accuracy. It’s not perfect but it’s a start. The students plan on doing more research and getting the device to the point of a 98 or 99% accuracy.