Like the US, Japan is facing a dilemma of making sure there is enough care for all of its seniors. With Japan’s aging society facing a predicted shortfall of 370,000 caregivers by 2025, the Japanese government is getting creative. They are laying groundwork for seniors to be taken care of by robots. Yes, that’s right, robot caregivers in Japan is going to be a thing. 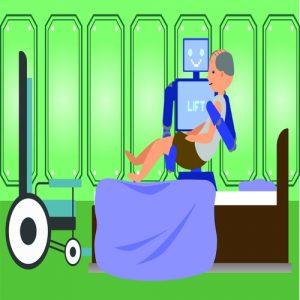 The robots are simple in the sense that they are focused on lifting frail seniors to help them out of their bed and into a wheelchair. They can also help ease seniors into bathtubs to reduce falls.

Developers are hoping to create robots that can predict when someone needs to use the bathroom, so they can assist them with that as well.

The goal for these robots is to assist nursing staff and be able to keep people home longer. The lifting robots have been deployed in around 8% percent of nursing homes in Japan. The small percentage is partly due to the cost and partly to how people react to the robots.

Many feel that only other humans can care for humans in such a vulnerable state. For the sake of cost, these robots do not look like humans or talk yet.

The next research ideas include wearable mobility aid devices that can help go up and down hills using smart technology. According to Japan’s robot strategy, the government hopes that four in five care recipients accept having some support provided by robots by 2020.