This week’s segment is story time with Judy. Judy shared a story she wrote and read at the first annual Storytelling Festival at New Hampshire Institute of Art. The story titled “Take My Hand” was about caregiving and the power of helping out. 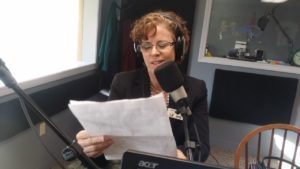 It opens about Danny, Judy’s son, going to college in Montana. Judy had no idea that he had applied to any colleges. Before you think Judy not involved enough, she was there with Danny every step of the way. She cheered for him, cried for him, did the parental threatening.

When Judy and Randy went to visit Danny in Montana. There was a small dusting of snow but that didn’t stop them from bouldering. Judy was the third in line of their group and right when she was near the top, she got stuck.

She couldn’t go up or down. Danny reached down and said, “Mom, take my hand.” Judy realized that her son is all grown up.

In 2013, Judy became her parents primary caregiver. She went with them to the doctors, ran errands, held their hands. Similar to Danny, Judy encouraged and cheered for her parents with every sign of independence.

Her parent’s were thankful for the assistance. Knowing when the right time to extend a helping hand is key. Too early and it’s rejected, too late might result in not getting to the top of that mountain.

When you are ready to accept the responsibility of becoming a caregiver for a senior, remember that timing is everything. And, don’t forget the power of offering a helping hand.