Sometimes the word retired can bring negative connotations. Some people may write off someone as insignificant when they hear the word, or maybe they aren’t sure what to talk about once they know. Some of this comes from ageism, the idea that if you are not working, you now no longer have anything to offer. But there are better words for retired. 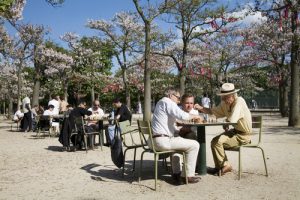 Some popular terms are retooling, rebooting, reimagining, reinventing, but one that stands out is jubilee. This stands out no only because it breaks the “re” pattern but it’s not a word that is often brought up in conversation. The definition of jubilee is “a special anniversary of an event, especially one celebrating twenty-five or fifty years of a reign or activity.”

This can mean that maybe you chose retirement, aka to have more free time to enjoy life, rather than it being thrust upon you due to age.

Jubilee has Judeo-Christian roots, which you can find in The Bible’s Book of Leviticus. It’s linked to the number seven and tied to the ideas of a weekly Sabbath and a Sabbatical after seven years of labor. After seven sabbaticals, or 49 years, a person reaches the big one, Jubilee. In this year, The Bible says that God commands his people to stop working, forgive debts, and return family property.

Fun fact: The Queen of England celebrated her Golden Jubilee during the 50th year of her reign, in 2002.