Are you a sarcastic person? Have you ever been sarcastic and someone took you seriously? There’s a study out that says that having problems with detecting sarcasm could be a sign of dementia. 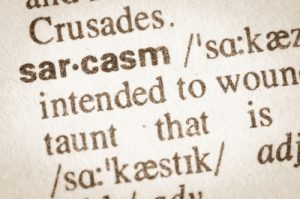 Problems with Detecting Sarcasm Could be a Sign of Dementia

Of course, the study doesn’t mean once or twice. If someone who is older is consistently missing cues that sarcasm being used, then it’s an issue.

The study, done by University of California, had 90 participants, 77 who had some form of cognitive impairment and 13 healthy controls. The participants took part in Social Inference, a subtest of The Awareness of Social Inference Test. This is a test to see how they handle and respond to a social interaction with one person using sincerity and sarcasm to communicate.

To do this they watched a video with actors and then took a yes or no quiz. Not only were words a key focus but so was body language, the actor who is being sarcastic would use exaggerated movements to show sarcasm.

The results of the test showed that everyone in the group could recognize sincerity very easily. As for the sarcasm scores, they were vastly different across the cognitive impaired participants.

So the participants who have Semantic Dementia may have lost the ability to recognize sarcasm. Overall participants with different forms of dementia failed the test. Though they did do better at recognizing sincerity.

This is something important to remember when interacting with loved ones with dementia. They may take your sarcasm seriously and they may get hurt feelings.