In this segment, Judy and Rich discuss seniors and living wills. They open with talking about “at risk” people, these are people who aren’t safe in their homes or not safe to be left alone due to injury or cognitive impairment. Judy states that the number one fear that elderly people have is loss of control. This can happen easily if their loved ones are concerned for their safety and everything starts to change. To them, it feels like suddenly they have no control.

But what is surprising is that very few people have started the process to have their wishes honored. 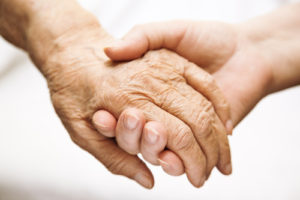 Judy recommends The Conversation Project, centered in Boston, which has developed tools to help get the conversation started. About 90 percent of people say having the conversation is important but only 27 percent actually have that conversation. Neither Judy or Rich were surprised by the numbers.

It’s a tough conversation to have. It can feel like the beginning of loss of control. Even Judy had to take baby steps with her father to find out what his wishes were. A study in 2012 found that only 15 percent of patients with Alzheimer’s had a living will and only 39 percent have a healthcare proxy. Which is concerning because now they have a cognitive impairment so they aren’t able to describe their wishes or they might think they are significantly younger than they are.

Having the papers ready can help stop a lot of discord in the entire family. Courts could get involved and disagreements can hurt family members. If only one person knows the wishes verbally and something happens to them, then the wishes are gone. Papers are cut and dry, and they lay everything out. Please, if you are a parent, the child, a doctor, don’t hesitate to have this conversation.